The first purpose-built plant in India by ARaymond Network**, one of the worldwide leaders in fastening and assembly solutions, is to be showcased as an example of a world-class manufacturing facility by the Kaizen Institute, a global lean management*** consultancy, following a visit by the Institute to the new facility on December 30th 2013.

Vinod Grover, CEO of the Kaizen Institute, attended the official inauguration when the new facility was officially opened in October 2013 in Chakan, near Pune, in the state of Maharashtra in Western India.

Mr Grover described the facility as “truly a visual plant,” and “tastefully done,” adding that the plant is “on the way to becoming a global model plant in the ARaymond Network universe.”

And Mr Grover was so impressed with the infrastructure, visual management and lean implementation in progress at the plant that he wanted his colleagues, who support implementation of lean practices in different parts of India, Africa and the Middle East, to also visit the plant and evaluate the facility. As many as 32 staff from Kaizen Institute visited on December 30th, and picked out many aspects of this ARaymond* facility for praise.

The ARaymond plant in India is one of the pilot sites chosen by ARaymond Network for its implementation of ATOMS (ARaymond Total Operations Management System), the new operational management system of the Network. ATOMS is composed of seven elements: workplace management; total quality; process optimization; flow management; people engagement; leadership and organization; and strategy deployment. ATOMS has been designed specifically for ARaymond Network processes and people, and is based on the Network values, with all seven elements of ATOMS reflecting the values of the organization.

Manish Padharia, managing director of ARaymond in India, explained that Kaizen Institute has been supporting ARaymond in its implementation of ATOMS, and they have lauded this ARaymond plant’s progress so far in implementing all the different aspects of ATOMS. “They said that this is in line with their vision to promote operational excellence, and that they were delighted to see the India plant make a promising beginning,” he said. “They appreciated how ATOMS was deployed, and the involvement and empowerment of the people through ATOMS.”

Mr Murthy put it simply, saying: “Passion + focus = ATOMS.” The Kaizen Institute team was also impressed with the plant’s architecture, gemba (factory floor), manufacturing processes, innovation culture, and commitment to sustainability. “This building is based on ARaymond Network values, and we were able to showcase each aspect of this,” said Mr Padharia.

He added: “This feedback was of importance to us, since we were evaluated by experts in lean implementation. It motivates the staff that all their efforts on ATOMS are receiving recognition.”

Selamawit Solomon, assistant consultant at Kaizen Institute Ethiopia, who also visited the ARaymond plant in India, said: “This factory is simply superb. The challenge is now to continue to improve. The journey has started - the sky should be the limit.”

The Chakan facility, which is primarily manufacturing ARaymond™ plastic fasteners and quick connectors for India's automotive and large industrial market, has also received visits from the automotive companies Yazaki India and Maruti Suzuki India, who were both also impressed with the plant. 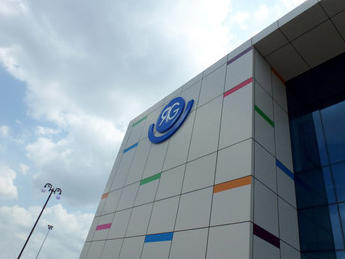 * ARaymond means in this article A RAYMOND FASTENERS INDIA Pvt. Ltd – Registered N°: U24139PN2007PTC133150 – Pune (INDIA), which is an independent company of ARaymond Network
** “ARaymond Network”, “Network” -please refer to Legal Term of the website
*** Lean management describes an approach to manufacturing that seeks to eliminate any use or expenditure of resources that doesn’t create value for the customer