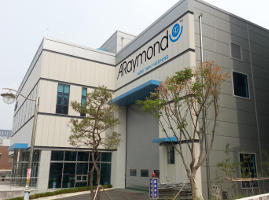 ARaymond*, one of the world’s leading suppliers of fastening solutions to the automotive industry, has strengthened its presence in Asia with the launch of manufacturing operations in Korea.

ARaymond has had a sales office in Korea since 2006 and its new plant in the city of Hwaseong-si commenced production in June.

The automotive sector in Asia continues to grow and is a key strategic market for ARaymond, which accounts for 20% of the global market for fasteners. According to the Korean Automobile Manufacturers Association, Korea’s car market will grow by 2.5% in 2015 to 1.65 million units (source: CCFA).

In a country with renowned automotive brands such as Hyundai, Kia, GM Korea, SSangyong Motor, Renault Samsung, Doosan and Zyle Daewoo Bus, ARaymond will be supplying a variety of assembly solutions and metal and plastic fasteners for car interiors and engines, particularly for cooling and fuel supply systems.

"ARaymond has always sought to be close to its customers and since the automobile industry in Asia continues to experience strong growth, opening this factory is a natural next step for us and reflects our desire to continue to expand on the continent,” said Antoine Raymond, CEO, ARaymond Network**.

“This approach is firmly rooted in our company's DNA. We don't delocalize the manufacture of our parts, but instead produce locally for the domestic market."

ARaymond has been present in Asia since 1996, opening a plant first in China, followed by Japan in 1997 and then India in 2007. The capacity of the Japanese facility was increased last year while new branches in Thailand and Singapore were opened in February of this year. Besides Asia, the company’s primary markets are Europe and the United States.

The first ARaymond Network ‘company’ abroad – a factory in Lörrach, Germany – opened in 1898 but it was not until the 1970s that the Network international expansion intensified. The strength of the ARaymond Network has been to capitalize on its close collaboration with local partners for each of its new branches while continuing to pursue continuous improvement in support of its global mission and long-term vision for the future.

Today the ARaymond Network has 5,500 employees in 25 countries, 11 R&D centres and 25 production sites, with a global turnover of 930 million euros; 95% of sales are from the automotive industry and 87% from international markets.

• The ARaymond Network is a worldwide leader in fastening and assembly solutions for the automotive industry. Its products are used in the manufacture of nearly all vehicle classes, from city cars to luxury limousines. Other key markets are: Truck, Industrial, Energies, Agriculture and Life.

• Headquartered in Grenoble, France, the ARaymond Network is made up of 37 independent enterprises located in Europe, North and South America, Asia and North Africa. Together these companies operate 25 production sites and employ 5,500 people. Six per cent of turnover is invested in research and development every year.

• Established in 1865, the ARaymond Network has been a family-owned business throughout its history. Current CEO Antoine Raymond is the great-great-grandson of founder Albert-Pierre Raymond.