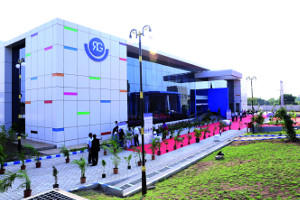 Facility in Chakan, near Pune set to become one of few Indian companies to receive LEED Gold certification

The new ARaymond* plant in India, which supplies a range of fasteners to automotive and industrial companies across the country, has quickly become established as one of the most environmentally sustainable facilities in India.

The plant, in Chakan, near Pune in the state of Maharashtra in Western India, is the first purpose built facility in India by ARaymond Network**, one of the worldwide leaders in fastening and assembly solutions. The plant was officially opened in October 2013, and is set to receive the LEED New Construction (NC) Gold certification in 2014, making it one of very few manufacturing facilities in India to receive the certification. LEED (Leadership in Energy and Environmental Design) is an internationally recognized rating system for the design, construction, operation and maintenance of green buildings, homes and neighborhoods.

ARaymond in India has spent around 8% of its budget for the new purpose built plant on ensuring it has a reduced carbon footprint and minimal energy consumption, and in order to do so has focused on the five essential elements of the construction - soil, energy, water, air and materials.

The new facility’s uncompromising commitment to a sustainable environment – a key focus for ARaymond Network – has captured the attention not only of ARaymond customers across India, but also the country’s manufacturing industry as a whole, as well as the local people in Chakan and the surrounding area.

Prior to even starting construction of the plant, ARaymond removed around 2,500 cubic meters of fertile black cotton top soil on the site chosen for the new building so that it could be conserved and utilized for landscaping elsewhere.

In order to maximize the use of energy at the plant, ARaymond has installed an evaporative cooling system that consumes 80% less energy per year than a standard air conditioning system, while still providing comfort for all staff. In addition, 160.1 MWh per year is saved because artificial light is not required during the day due to extensive use of glass, and 400 MWh per year is saved through energy efficient LED street lighting and T5 compact fluorescent lamp (CFL)-based internal lighting luminaire, as well as automatic motion sensors.

Daily use of water is 77% lower than with a conventional building due to low-flow plumbing fixtures, a dual flush system and water recycling. In addition, an aquifer recharge system is used, with almost 300 cubic meters per day of rain water (equivalent to the daily water requirement of 500 households) collected from the roof top, and recharged into the ground water system.

ARaymond is also planting trees close to the facility in order to balance the plant's industrial emissions. The plantations are estimated to absorb nearly 4,200 kg CO2 (equivalent to the amount produced by a car driving 40,000 km) per year of the total emissions generated by the factory.

Meanwhile, the materials used for both the building envelope and the internal elements of the building contain 19% recycled content.

“This plant reflects our key values – respect for the environment, people, and local laws,” said Manish Padharia, the managing director of the Indian company. “A sustainable approach is very important for our clients – each and every customer talks a lot about this. We are also ensuring that the facility provides a comfortable and enjoyable working experience for all our staff.”

A range of ARaymond™ plastic fasteners are being manufactured at the site, and as well as supplying India's automotive and industrial markets, from 2015 ARaymond in India also plans to meet the demand for fastening solutions from the country's growing renewable energies sector.

In 2014, Rayce, the ARaymond Network advanced R&D resource, which is present in several key markets of the Network, will open an R&D centre at the Chakan plant, which in total plans to invest €1 million over the next three years in R&D. And in 2015, the plant will extend into the production of metal fasteners.

The facility currently employs 107 people, with plans to grow the number of staff to 250 by 2016. ARaymond in India will be hiring talent from the surrounding area, creating additional employment opportunities for local people. 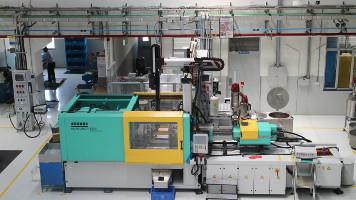 ARaymond in India was established in 2007, initially using a design and manufacturing facility close to Chakan, near Pune, in the state of Maharashtra in Western India. The first purpose built plant was officially opened in Chakan in October 2013.

The new facility supplies the automotive and industrial sectors in India with a range of ARaymond™ plastic fasteners specifically designed for the local Indian market. The plant carries out core processes including product development, plastic injection molding and assembly.